You are not connected. Please login or register
2 posters

The T-X program has been established to enable the United States Air Force to buy a new two-seat jet trainer for fast-jet training to replace the Northrop T-38 Talon; the average age of the T-38 fleet is over 43.5 years. About 350 aircraft are expected to be ordered to replace the T-38, but further purchases could push the overall purchase to over 1,000. The notional in-service date for the replacement trainer was 2017, but shrinking budgets have pushed initial operating capability to around 2023. The program is expected to begin in FY 2017.

The USAF's Air Education and Training Command (AETC) has been developing requirements for the T-38 replacement program since 2003. Originally, the replacement trainer was expected to enter service around 2020. A fatigue failure in 2008 killed the two person crew of a T-38C, advancing the target service date to 2017.[2] In the Fiscal 2013 budget proposal the USAF suggested delaying the initial operating capability to FY2020 with the contract award not expected before FY2016.[6] Shrinking budgets and the need to fund higher priority modernization projects have pushed the IOC the T-X aircraft to "fiscal year 2023 or 2024." The delay was a direct result of budget constraints, so the T-X was pushed back to support higher Air Force priorities. Although the program was left out of the FY 2014 budget entirely, the service still views the trainer as a priority.

In February 2013 there was an expectation that the program might succumb to budget pressures in the USAF. In May 2013, the T-X industry day was postponed "until further notice" due to the fiscal climate.[8] In December 2013 the head of the program said there were no plans for 2014 or 2015, but that he would speak to the chief of staff about the program either in February 2014 or later.
On 20 March 2015, the T-X program requirements were released by US Air Force officials.

One of the driving requirements for the new trainer will be to help prepare pilots for the increased complexity in some areas, particularly information management, that are a part of fifth generation jet fighters like the F-22 Raptor and the F-35 Lightning II. The Air Force first viewed this as unnecessary and costly, but industry analysis showed it to be cheaper in the long run.The aircraft and simulation system will have to fulfill several basic training roles; basic aircraft control, airmanship, formation, instrument and navigation, advanced air-to-air, advanced air-to-ground, and advanced crew/cockpit resource management. Furthermore, there are five advanced training roles that the system is expected to fulfill; sustained high-G operations at 6.5-7.5g, aerial refueling, night vision imaging systems operations, air-to-air intercepts, and data-link operations. The 2009 Request For Information (RFI) mentions that some tasks, such as aerial refueling, may be performed in the simulator and not on the aircraft itself. Aircraft availability is to be 80%, but not higher, as that would drive cost too high. Program requirements focus on life-cycle costs rather than just purchase price.

Additionally, while the RFI is specifically for a USAF trainer, it asked potential suppliers about the feasibility of a fighter/attack variant of the aircraft and a carrier-capable variant for the United States Navy. However, the requirements manager for the program, Stephan Lyon, has stated that it is unlikely that potential combat performance will be considered. Similarly, while Navy officials will be participating in some stages of the program, carrier suitability will not be part of the evaluation.[2] Similarly, the Air Force considered the possibility of adapting the T-X aircraft to perform light attack and close air support as part of their effort to retire the A-10 Thunderbolt II. With the T-X already invested in, making it a multirole combat and training plane could defray costs of developing a new attack jet that can operate efficiently in a low-threat environment. However, by 2016 the Air Force decided to pursue other aircraft to meet CAS requirements and not "dilute" the trainer program to support other missions.

Although the formal request for proposals has not been released, several competitors are expected to submit existing aircraft and others are considering all new designs. Those expected to propose existing aircraft are Alenia Aermacchi with the M-346 Master, Korea Aerospace Industries/Lockheed Martin with the T-50 Golden Eagle. Textron AirLand is evaluating possible modifications to its Scorpion, currently a single flying prototype, from tactical jet to trainer aircraft to meet the expected T-X requirements. Northrop Grumman initially planned to submit the BAE Hawk, but later switched to a new design. Boeing was said to be considering several options, including a new aircraft. Boeing had an existing partnership with Alenia to market the M-346 internationally, and also with BAE on the T-45 Goshawk. Boeing instead partnered with Saab Group to offer a new, purpose-built aircraft for offer to the U.S. Air Force. 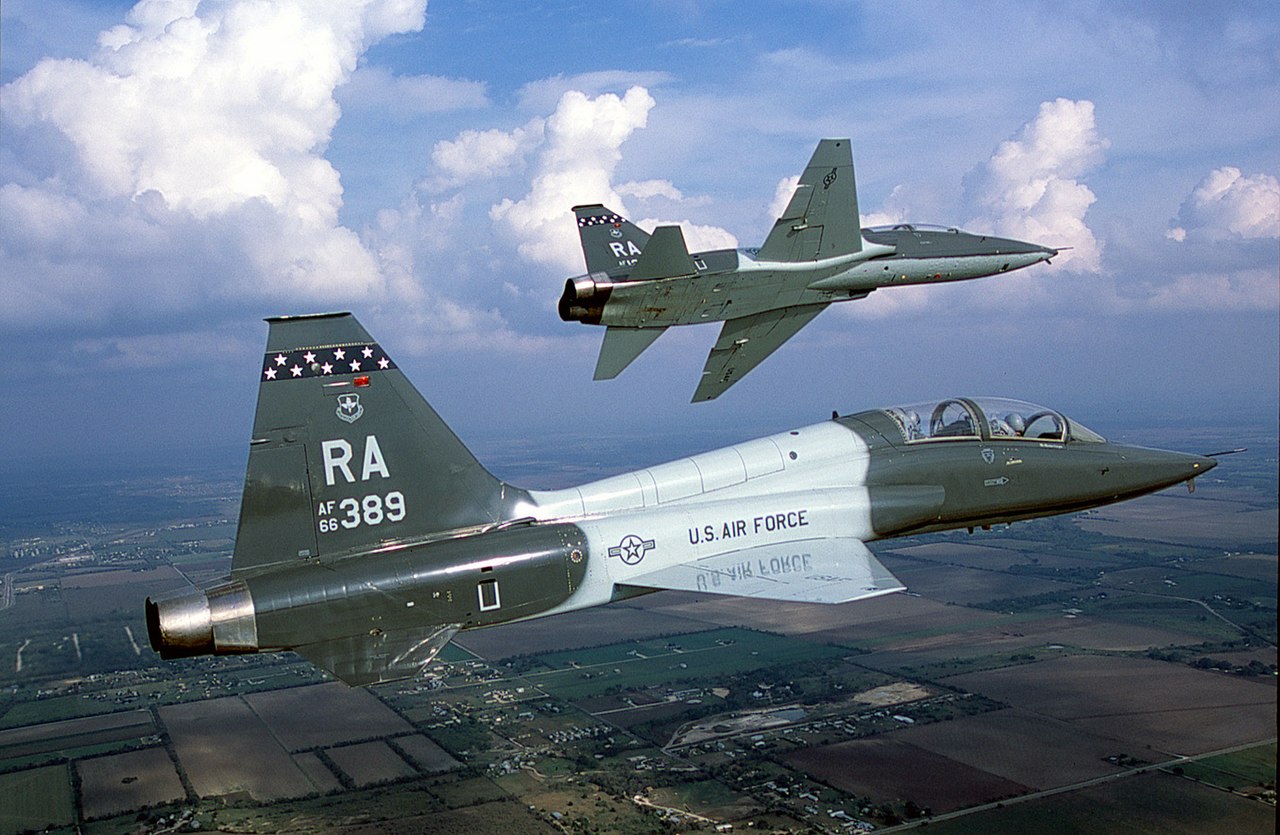 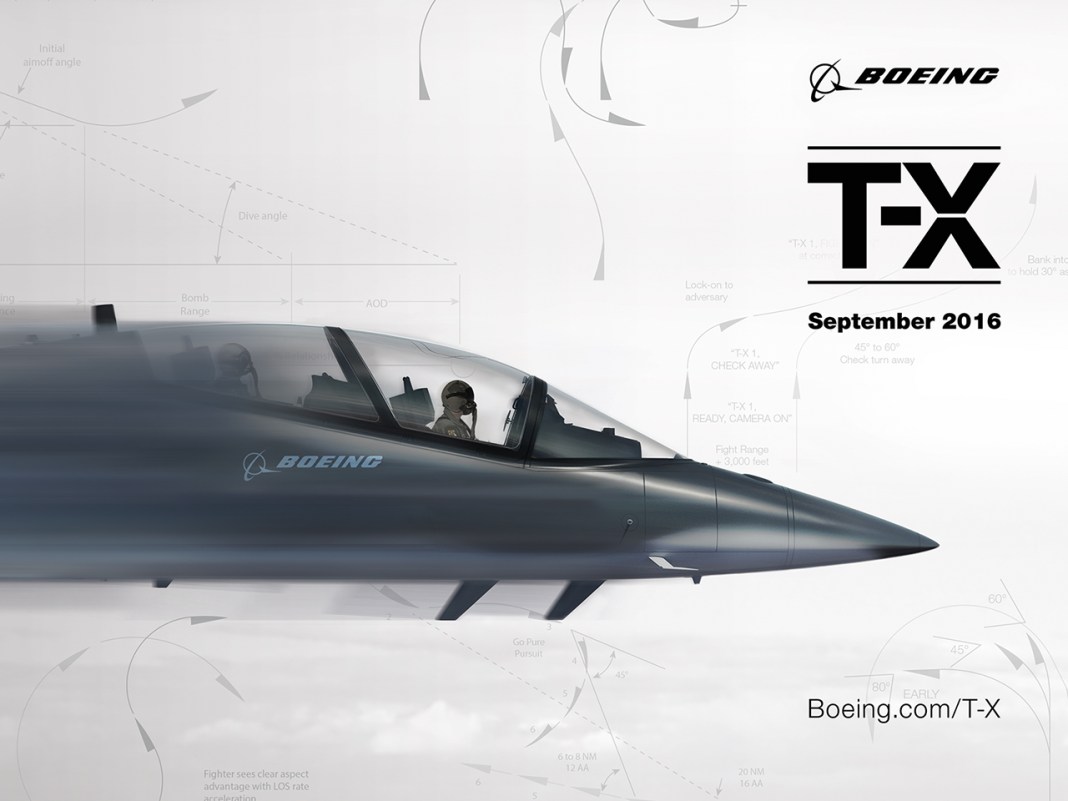 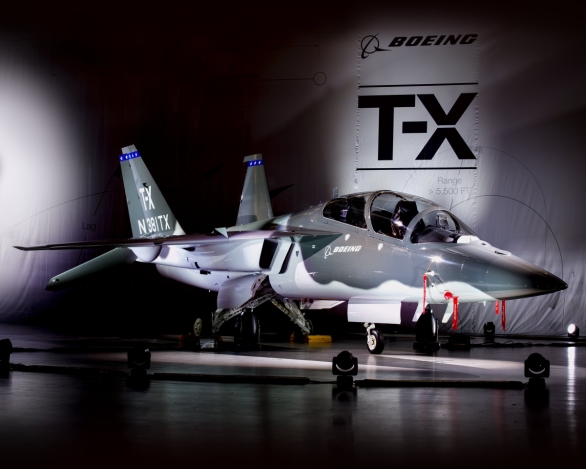 Who Has The Edge In The U.S. Air Force T-X Trainer Competition?

In the latest version of the T-X draft request for proposals (RFP), the Air Force threw contractors a curveball—incentivizing industry to exceed the threshold requirements for specific performance aspects. For the aircraft’s crucial G-capability requirement,
this means that for every 0.1g above the 6.5g threshold, and up to the 7.5g objective, the bidder will receive a bonus. In other words, for two T-X proposals at the same price, the one with the higher sustained-G capability will be rated higher overall.
Depending on the cost of the competing solutions, a proposal with a slightly higher price tag for a greater sustained-G capability could receive the better rating.
The Air Force will release a final RFP in December, and anticipates awarding a contract in 2017. T-X initial operational capability is planned for 2024. 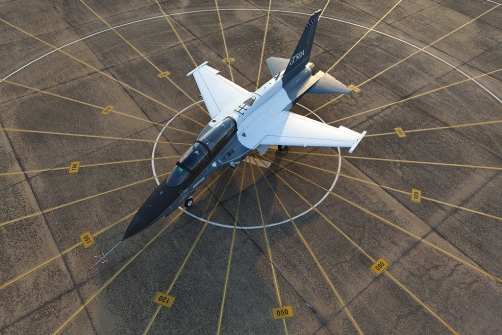 Lockheed Martin and Korea Aerospace Industries’ (KAI) T-50A is a variant of KAI’s T-50, currently in use with the South Korean, Indonesian and Philippine air forces and recently ordered
by Iraq and Thailand. Codeveloped with Lockheed’s Skunk Works, the T-50A will be built in Greenville, South Carolina. 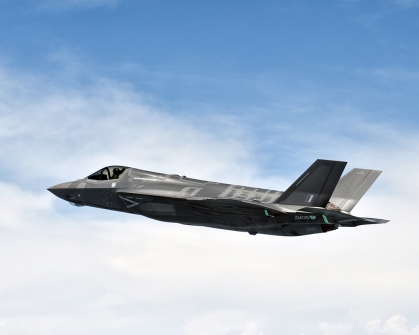 > Proven design. The T-50A is an upgrade to an existing design, which reduces cost and risk. Lockheed will promote the T-50A
as the “lowest-risk, lowest-cost solution that gets us most of the way,” says an industry analyst.
> Part of a family. Lockheed’s T-50 would transition easily to the Air Force’s fleet of other Lockheed aircraft—the F-35 and F-22.
> Company record. Builds on Lockheed’s history with advanced training and simulation products.
> Meets the need. T-50A’s F404-GE single engine can meet and exceed the T-X sustained G-force requirements. 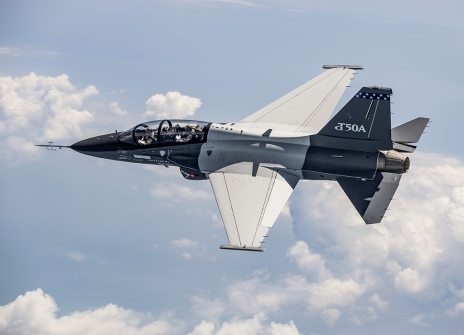 > Limited flexibility.  The T-50 may struggle, particularly as the requirements change. Competitors may have more flexibility to meet the terms of the solicitation if
they are developing a new aircraft rather than modifying an existing one. That limitation may be exacerbated if the Air Force continues to incentivize performance.
> Lacks backup power. The single-engine T-50 has no propulsion redundancy, which could be a safety concern for inexperienced pilots. 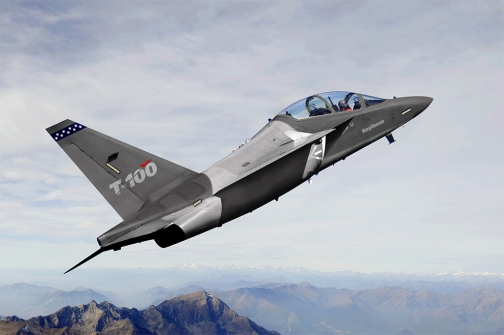 The T-100 is based on Leonardo’s (formerly Finmeccanica) two-seat M-346currently operated by the Israeli, Italian and Singaporean air forces, and the
first delivery to Poland is expected by the end of the year. Raytheon is the prime contractor, while Leonardo provides the airframe; CAE designs and
manufactures the simulation equipment, training systems and courseware; and Honeywell Aerospace provides the propulsion system.
Raytheon has said the T-100 will be assembled in the U.S. but has not announced a location. 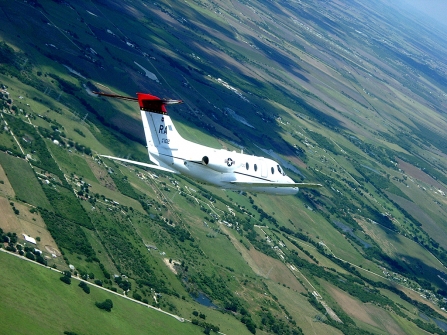 > Proven design. The T-100 is likely lower-cost and lower-risk than its clean-sheet competitors.
> Company record. Raytheon and Leonardo bring significant experience in training and simulation systems.
U.S. airmen learning to fly tankers and airlifters have trained on Raytheon’s T-1A aircraft since 1993.
> Technology upgrade. Leonardo says the T-100 is the only proposal with a
virtual embedded training capability—live, virtual, and constructive (LVC) — that enables pilots in the air to train jointly with
their colleagues in simulators on the ground—a huge plus, given the U.S. Air Force’s shortfall of airframes on which to train.
Pilots in Israel and Italy are already training with the new LVC system. 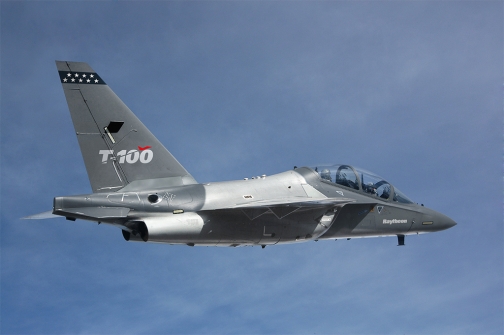 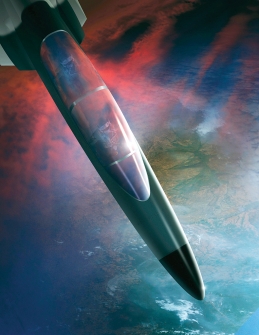 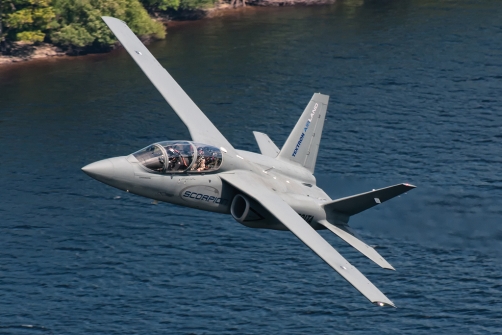 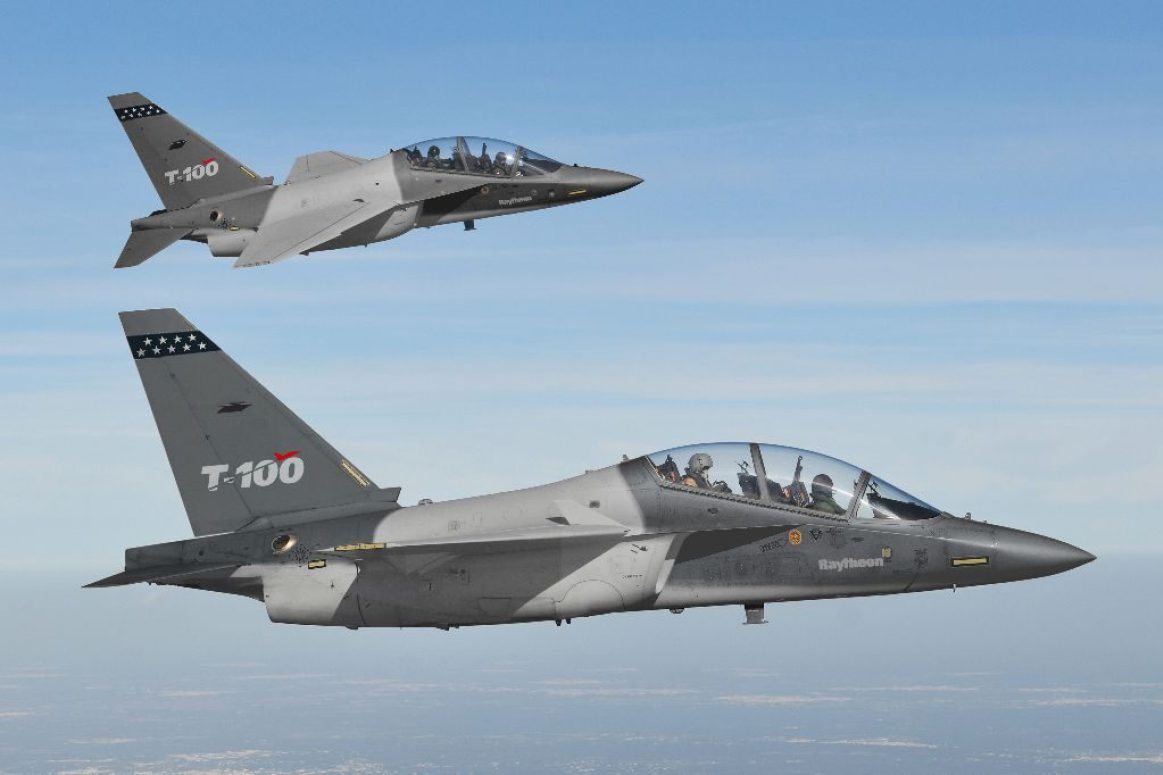